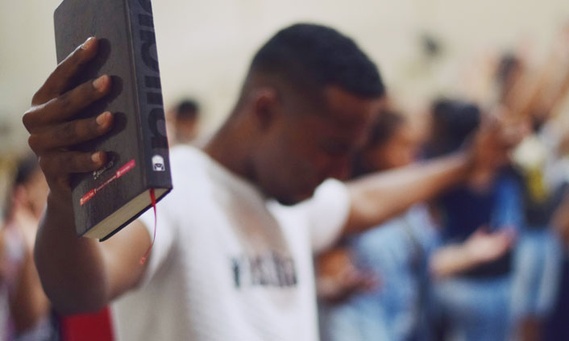 They Sang a New Song: Charles Spurgeon’s Reflections on the Heavenly Hymn in Revelation 5

In a sermon on “The Heavenly Singers and Their Song,” Charles Spurgeon wrote this:

“They sang a new song, saying, ‘Worthy are you to take the scroll and to open its seals, for you were slain, and by your blood you ransomed people for God from every tribe and language and people and nation, and you have made them a kingdom and priests to our God, and they shall reign on the earth’” (Revelation 5:9-10). I must take away the poetry for a moment and just deal with the doctrines of this heavenly hymn.

The first doctrine is that Christ is put in the front; His deity is affirmed. They sing, “Worthy are you.” A strong-winged angel speeds his way over Earth and Heaven and down the deep places of the universe, crying with a loud voice, “Who is worthy to open the scroll?” (Revelation 5:2). But no answer comes, for no creature is worthy. Then came One of whom the church cries in its song, “Worthy are you.”

Yes, beloved, He is worthy of all the praise and honor we can bring to Him. He is worthy to be called equal with God; He Himself is God, very God of very God. And no man can sing this song, or ever will sing it, unless he believes Christ to be true deity and accepts Him as his Lord and God.

Next, the doctrine of this hymn is that the whole church delights in the mediation of Christ. Notice that it was when He had taken the scroll that they said, “Worthy are you to take the scroll” (Revelation 5:9). To have Christ standing between God and man is the joy of every believing heart. We could never reach up to God except that Christ has come to bridge the distance between us. He places one hand on man and the other upon God. He is the mediator who can lay His hand upon both, and the church greatly rejoices in this.

Remember that even the working of providence is not apart from the mediation of Christ. I rejoice in this, that if the thunders be let loose, if plagues and deaths around us fly, the child of God is still under the mediator’s protection. No harm shall happen to the chosen, for Jesus always guards us. All power is given unto Him in Heaven and in Earth, and the church rejoices in His role as mediator.

But now notice: in the church’s song, what is her reason for believing that Christ is worthy to be a mediator? The church says, “Worthy are you . . . for you were slain” (Revelation 5:9). Ah, beloved, when Christ undertook to be her mediator, this was the extreme point to which His pledge to be her substitute could carry Him—to be slain! Jesus is never more glorious than in His death. His substitutionary atonement is the culmination of His glory, as it was the very utmost depth of His shame. Beloved, we rejoice in our mediator because He died.

A thing that is redeemed belonged originally to the person who redeems it, and the redeemed of the Lord were always His. “Yours they were,” said Christ, “and you gave them to me” (John 17:6). They always were God’s. You cannot go and redeem a thing that does not belong to you. You may buy it, but you cannot redeem it. Now that which belonged originally to God became indebted through sin. We, having sinned, came under the curse of the law. And though God still held to it that we were His, we were yet under this embargo: sin had a claim upon us.

Christ came and saw His own, and He knew that they were His own. He asked what there was to pay to redeem them, to restore His ownership. It was His heart’s blood, His life, Himself that was required. He paid the price and redeemed them, and we tonight sing, “By your blood you ransomed people for God from every tribe and language and people and nation, and you have made them a kingdom and priests to our God, and they shall reign on the earth” (Revelation 5:9-10).

He has, by redeeming us, separated us to Himself and made us a holy people, bought with blood in a special sense out of all the rest of mankind.

This redemption is the grounds for the distinction of God’s holy people: “By your blood you ransomed people for God” (Revelation 5:9).

God never wearies of the precious blood, nor will His ­people who know where their salvation lies. They do not, even in Heaven, say that it is a dreadful word to mention. I heard a man the other day say of a certain minister, “Oh! We want another minister; we are tired of this man. He is always talking so much about the blood.” In the last great day, God will be tired of the man who made that speech.

One of my favorite songs right now is “The Lion and the Lamb” by Big Daddy Weave. I can’t tell you how often it runs through my mind, and makes me feel JOYFUL and hopeful at the same time.

As you listen to this song, reflect on our only Hope of Glory. Read through Revelation 5 (below) and exult in our Savior and Lord Jesus Christ, the Lion and the Lamb:

Revelation 5: The Lamb Takes the Scroll

And I saw in the right hand of Him who sat on the throne a scroll written inside and on the back, sealed with seven seals.

2 Then I saw a strong angel proclaiming with a loud voice, “Who is worthy to open the scroll and to loose its seals?”

3 And no one in heaven or on the earth or under the earth was able to open the scroll, or to look at it.

4 So I wept much, because no one was found worthy to open and read the scroll, or to look at it.

5 But one of the elders said to me, “Do not weep. Behold, the Lion of the tribe of Judah, the Root of David, has prevailed to open the scroll and to loose its seven seals.”

6 And I looked, and behold, in the midst of the throne and of the four living creatures, and in the midst of the elders, stood a Lamb as though it had been slain, having seven horns and seven eyes, which are the seven Spirits of God sent out into all the earth.

7 Then He came and took the scroll out of the right hand of Him who sat on the throne.

8 Now when He had taken the scroll, the four living creatures and the twenty-four elders fell down before the Lamb, each having a harp, and golden bowls full of incense, which are the prayers of the saints.

9 And they sang a new song, saying:

“You are worthy to take the scroll,
And to open its seals;
For You were slain,
And have redeemed us to God by Your blood
Out of every tribe and tongue and people and nation,

10 And have made us kings and priests to our God;
And we shall reign on the earth.”

11 Then I looked, and I heard the voice of many angels around the throne, the living creatures, and the elders; and the number of them was ten thousand times ten thousand, and thousands of thousands,

12 saying with a loud voice:

“Worthy is the Lamb who was slain
To receive power and riches and wisdom,
And strength and honor and glory and blessing!”

“Blessing and honor and glory and power
Be to Him who sits on the throne,
And to the Lamb, forever and ever!”

14 Then the four living creatures said, “Amen!” And the twenty-four elders fell down and worshiped Him who lives forever and ever.

Please excuse any ads that may appear before the video begins
…
If for whatever reason you cannot view this video, you can read the complete lyrics here.

Another great Bible study from GraceThruFaith.

The Two Witnesses of Revelation

A Bible Study by Jack Kelley

And I will give power to my two witnesses and they will prophesy for 1260 days clothed in sack cloth. These are the two olive trees and the two lamp stands that stand before the Lord of the earth. If anyone tries to harm them fire comes from their mouths and devours their enemies. This is how anyone who wants to harm them must die. These men have power to shut up the sky so that it will not rain during the time they are prophesying and they have the power to turn the waters into blood and to strike the earth with every kind of plague as often as they want. (Rev 11:3-6).

What Was Your Name Again?

Several Old and New Testament figures have been suggested as the identities of these two, including Moses, Elijah, Enoch, John and Nathaniel. But if the two witnesses are Biblical figures from the past, the most logical candidates are Moses and Elijah, and here’s why. The supernatural signs used to authenticate the ministry of the two witnesses are the same ones that Moses (plagues, and water into blood) and Elijah (drought and fire) used to authenticate theirs and are decidedly Old Testament in their nature. Moses is known in Judaism as the giver of the Law, while Elijah is considered the greatest of Israel’s Prophets. In fact the Old Testament is often called “the Law and the Prophets”, hinting at the contributions of these two great leaders from Israel’s history. Who better to represent God on Earth during the time when He brings events foretold in “the Law and the Prophets” to their ultimate climax?

Beloved, are you tired of all the stuff of life here on earth these days? Are you longing for the return of our Lord Jesus Christ as much as I am? If so, you will love “Even So Come” by  Chris Tomlin if you haven’t heard it yet. If you have heard it before, you can sing along with me as you joyfully anticipate His coming. In fact, this song has been playing through my mind and heart for quite a while, especially this part:

Let’s not become weary of the storms of life as we wait for the return of Jesus. Instead, believe and trust in the prophetic words of God in the Book of Revelation:

He who testifies to these things says,
“Surely I am coming quickly.”Amen.
Even so, come, Lord Jesus!
The grace of our Lord Jesus Christ be with you all. Amen.
—Revelation 22:20-21

Please excuse any ads that may appear before the video begins
If for whatever reason you cannot view this video, you can read the complete lyrics here.

You have probably heard Revelation Song on the radio or sang along to it in church. This great worship and praise song was written by Jennie Lee Riddle. I love this version sung by Phillips Craig & Dean.

Please excuse any ads that may appear before the video begins
If for whatever reason you cannot view this video, you can read the complete lyrics here.

Pat Knight is the author of FEAST OF JOY, REJOICE! and PURE JOY, all of them filled with joyful devotionals. She maintains a ministry of handwritten encouraging notes for those who are hurting, and is also an avid gardener.